One of our internationally esteemed alumna and an inaugural inductee into our Avenue of Excellence, Penelope Thwaites AM, has just released a recording of premiere performances of some of her finest choral and vocal compositions; one of these being our own School Psalm No. 121, which she wrote for the school in 1964. The press release from SOMM Recordings describes some of the outstanding features of the recording and a glowing review appeared in the April edition of Classical Music April 2020.

Ms Penelope Thwaites was a student at Tintern from 1953-1960, School Pianist from 1958 to 1960 and a member of the Madrigal Group in 1958 and 1959. After leaving Tintern, in recognition of Miss Constance Wood’s completion of 25 years of service as Headmistress and in her honour, Ms Thwaites composed the music for a setting of Psalm 121: ‘I will lift mine eyes unto the hills’. This was first performed at the Annual Service at St. Paul’s Cathedral in October 1964 and remains the Tintern Grammar Psalm to this day.

Ms Thwaites has performed and broadcast in over 25 countries on five continents. She has appeared as soloist with leading orchestras in Britain, Australia, Europe and America. She is a committed protagonist for Australian composers, often including Australian repertoire in her programs. She was appointed to the Order of Australia (AM) in 2001 for services to Australian music.

If you are interested in purchasing a copy of this Ms Thwaites’ album, it can be ordered as a CD to be delivered from the UK or as a downloadable compilation (7 choices of format) through https://somm-recordings.com/recording/penelope-thwaites-from-five-continents/

The Tintern Music Department has managed to find alternate ways to host events and provide opportunities for students during the COVID-19 periods of isolation. During online learning, assemblies were pre-recorded and could be accessed via links. Concerts, such as the Annual Piano Concerts, were able to take place remotely, where the audience viewed recordings of performances. So, despite the circumstances, we found a way forward, safely and responsibly. The same applied to the IB Recital this year, which was held on 17 June, albeit a bit differently.

Every year, the IB Recital showcases the prepared works of the Year 12s in the IB Music class, and their performances are sent to the IBO for assessment. The IB Recital is also an opportunity to introduce the Year 11s of the IB Class, who each perform one solo piece. The concert had always taken place in the evening in front of an audience of teachers, parents and friends. Obviously, the audience and timing were different this year.

A live concert took place at 1:30pm on Wednesday 17 June. Instead of a few hundred people viewing the concert live, only around 20 people viewed the concert – this time consisting of teachers with spare periods, and invited classmates of the performers, all socially distanced, of course.

The concert consisted of solo performances by each Year 12 student – Ashleigh Dowling, Zoë Forbes and Clarisse Liew. Each prepared approximately 20 minutes of solo pieces and ensemble works. The students’ programs were diverse, ranging from many musical periods and styles, from Baroque to Jazz; each performance was a considerable feat in its own right, and each demonstrated impressive technical skills and musicality.

There were so many people involved in making the concert possible. The IB Music class would like to extend a vote of thanks to all of the teachers and students who came to view the concert, and those involved in the set-up, such as the amazing IT Department which helped with the recording and streaming of the concert. The members of the IB Music class also extend their thanks to the performers involved in ensemble pieces, as well as the dedicated and skilful music teachers at Tintern and beyond. Finally, we would like to say a special thank you to Ms Bortolussi, our class teacher. Without her tireless efforts in improving each student and refining each performance, all with patience and finesse, the IB Recital would not have been possible. 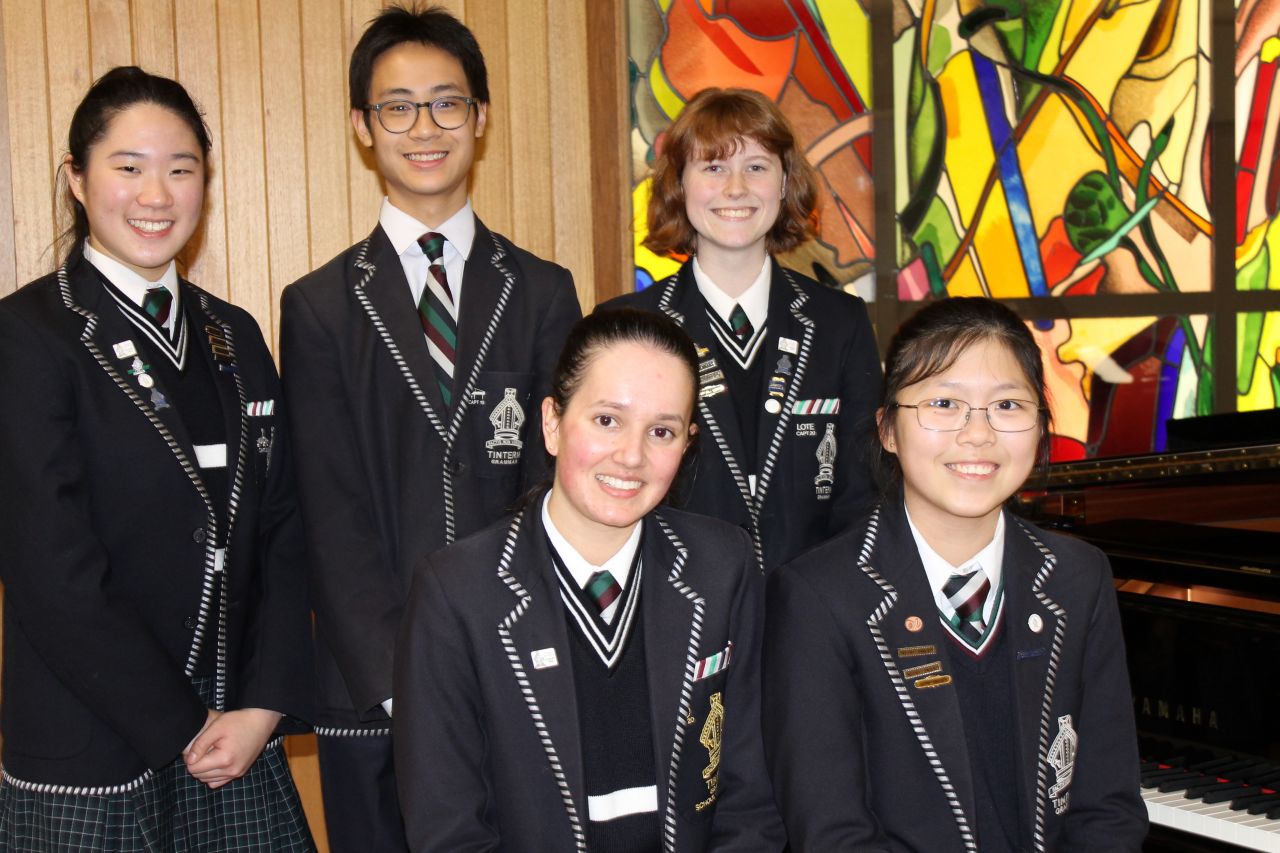 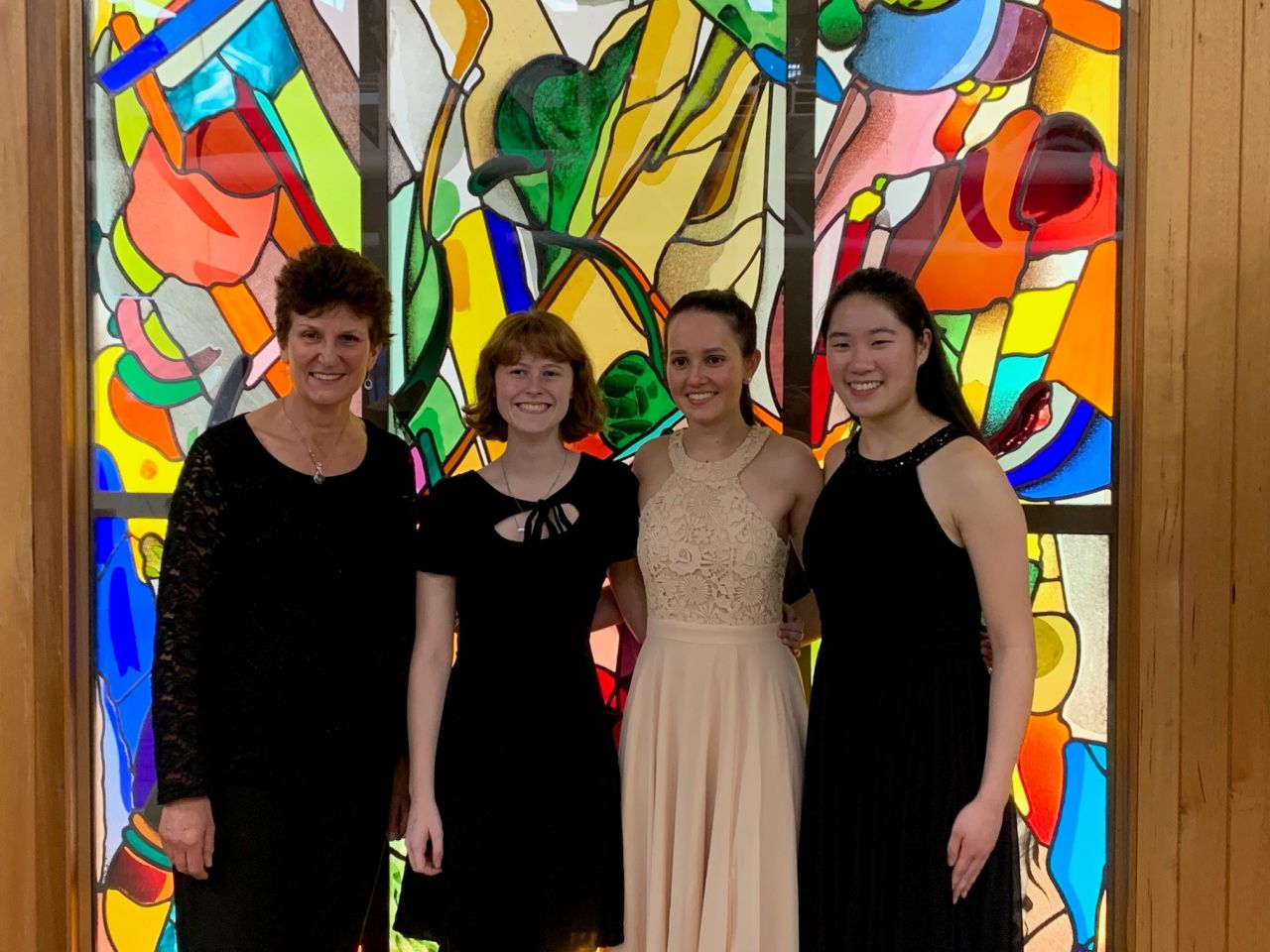 By the time the Annual Piano Concert for senior students occurred, most students had already experienced a few weeks away from school, undertaking online learning via Microsoft Teams. Due to everything which had been going on – social distancing, banning of public gatherings and self-isolation – many concerts and events had to be cancelled. However, thanks to the perseverance of music students and teachers, as well as the brilliant Tintern IT Department, it was possible to get the first ever Virtual Tintern Piano Concert up and running.

After a Junior Piano Concert at 5.00pm, the evening continued with a Senior Piano Concert at 7.00pm. In order to perform during the evening, each student recorded their piece at home, and drop boxed it onto the school portal. Students from years 7-12 submitted their recordings, with a variety of genres of piano pieces whose origins ranged across hundreds of years. Some of the pieces included more contemporary works such as Mission Impossible, Jurassic Park, I Dreamed a Dream and Mad World. Others included pieces written by the greats: Debussy, Oscar Peterson, Beethoven and Bach. Each piece was played amazingly so, despite the less-than-ideal virtual meeting, the audience were able to appreciate the work and passion of each performer.

The virtual concert was not without its difficulties, however. During one of the performances, a blackout occurred at the home of our Head of Keyboard, Ms McKenzie, whilst she was hosting and running the concert! Nevertheless, through the versatility of the music teachers, as well as help from the IT Staff, we were able to overcome this hurdle, and still experience an enjoyable concert.

For the concert finale, the two current School Pianists, Sarah and Josh each contributed excellent performances. Josh played a jazzy arrangement of a song by the Beatles that left the audience charmed. As the concert’s final piece, the 1st movement of Bach’s Partita in C minor was played skilfully by Sarah. Then, in keeping with current hygiene regulations, a ‘Coronavirus Etude’ was played, where the keys were gracefully wiped down with a sanitary tissue. Thus, concluded the Annual Piano Concert – held a little differently this year; the high standard of music that was played once again reflecting the resilience, versatility and perseverance of music students and staff alike.

Due to COVID-19 restrictions, we are unable to run our much-loved Annual Music Camp this year. At this stage, our Annual Concert, due to be held on 7 August, also has been postponed until further notice.

Our Year 11 students dressed to impress on Monday

Our talented Girls' Junior School graced the CM Wo

We were excited to be joined by our past students