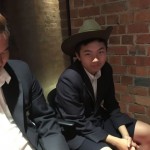 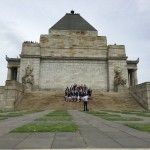 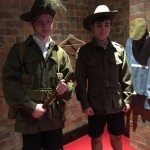 The Shrine of Remembrance commemorates all those killed in war in the hopes that the world will be at peace. Year 9 students studied World War One in History this year, so 9E and 9B travelled to the Shrine as part of our study on primary sources.

The students were moved by the diaries written by soldiers, as well as the artefacts including uniforms and medals the Shrine has on display. It was particularly special to those who had ancestors serve in combat throughout history and everyone was given the chance to hang a poppy in the garden.

It was an occasion of solemnity and the Shrine’s curators were impressed by the maturity and respect our students showed. We were given guided tours of the various exhibits, with careful attention paid to how various historical artefacts can be used as clues for uncovering past events.

Everyone was unsurprisingly subdued as we left the Shrine, due to the humbling effect of seeing so many touching stories of people from around the world.

It was a humbling experience.