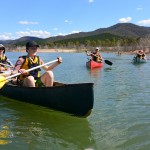 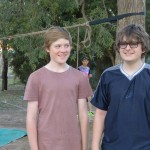 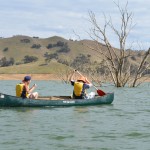 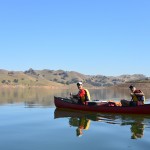 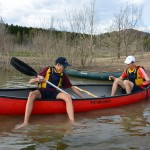 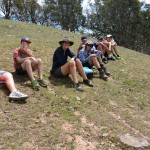 On Monday 6 November the Year 9 Outdoor Education class consisting of 6 students, teacher Mr Cleeland and freelancing Outdoor Education teacher, Corrine, set off for Lake Eildon. The purpose of the camp was to enhance students understanding of the outdoor environment and hone the canoeing skills that they had been practicing during class. When we arrived at Lake Eildon, after a grueling bus drive, everyone was very eager to hop in the canoes and paddle away. Unfortunately for us, we had to carry our gear in the canoes providing very good incentive for not capsizing the boat. The weather was perfect, warm with very little wind, which was greatly appreciated by the whole group. If anybody tells you that you can’t eat good food while camping, pay them no heed, as we all very much enjoyed our home made pizzas on the first night of camp.

The next day as we paddled out onto the lake, the wind picked up a bit, forcing us to make use of all of our canoeing skills. At one point we even used a tarp as a sail to propel ourselves along, to limited success. We set up for our bucket lunch on Crocket Island. A bucket lunch consists of bean mix, shredded cheese, salsa, apple, corn chips, guacamole, salami and whatever else we could find, all mixed up in a bucket. It was unexpectedly delicious. Later in the afternoon we all went for a short but steep walk up what we dubbed Crash Car Hill, which earned its name due to the abundance of tyre tracks that appeared to be trying to summit the rocky and dangerously slippery hill. We were rewarded with a stunning view of Lake Eildon and its surrounding areas once we reached the top. To cool off after the tiring walk we took all of our gear out of the canoes and paddled out to have a bit of fun.

The result of this was the unfortunate capsizing of Mr Cleeland’s canoe as a certain student attempted to board it unsuccessfully (unless, for some inexplicable reason, this was their goal in the first place). By this point everyone was quite wet and very tired, so bedtime came a bit earlier than normal. The next day, a tired, but very satisfied group of now seasoned canoers, packed up their gear and headed back to Tintern, to enjoy their exams the very next day! As you can imagine, they were absolutely thrilled. A special thanks to Mr Cleeland and Corrine for putting in as much effort as they did, to make the camp as interesting and exciting as it turned out to be, as this was definitely appreciated by all of the students attending.