On the Friday 1 September, the Year 8 Geographers went to Hanging Rock to complete the fieldwork component of their study of landscapes and landforms. Hanging Rock is a relatively rare volcanic landform and is globally recognised as being one of the best examples its kind. Rather than a typical volcano shape of a mountain with a crater, the mountain has eroded over several 10s of 1000s of years to leave the lava from the vent as a rocky projection – this is called a mamelon.

The students spent the day collecting data on land use, management techniques, human impacts and the flora and fauna found at the site. They studied the land forming processes that contributed to the way that Hanging Rock is today. This data will now be used in class to write a comprehensive report answering the student’s research question “To what degree have humans changed the natural environment at Hanging Rock?”

It was lovely to see in the café a picture of Tintern Grammar girls in February 1990 standing with their geography teacher and the Head Ranger of Hanging Rock. It illustrated the importance of traditions and the love of the outdoors being a hallmark of Geography teaching at Tintern. 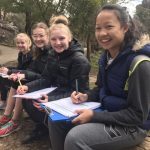 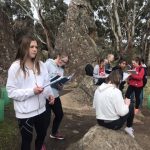 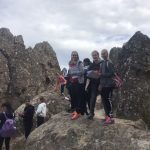 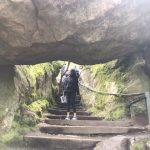 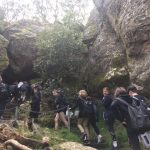 by Naomi Baulch, Head of Geography