Year 7 Night of the Notables

On the 31 of October, Tintern Grammar was lucky enough to host people of the likes of Marie Curie, Sir Douglas Bader, Steve Irwin and Audrey Hepburn in the CM Wood building.

Yes, the Year 7 Night of the Notables, 2017 version was upon us.  Year 7 students spent a number of weeks during their pastoral (and other) classes preparing an information booth about the notable of their choice: a person who made a positive impact on society during their life.

The list of notables was varied, ranging from politicians and scientists to sportspeople and explorers. After each notable was introduced, parents, grandparents and other family members wandered around the room finding out information about the person. 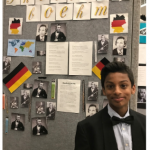 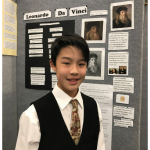 The boys of 7D also wrote a poem about their notable. Some of their writing is included below:

Jesse Owens was a runner who won four gold

Later on one of the medals was sold

Jesse Owens was a runner who won four gold

Jesse Owens competed in long jump, he started with 2 fouls

Hitler thought that Germans were the best

But Jesse Owens was better than the rest

But he always had skill and he had his shirt untucked

He got lots of awards after he was dead

That why we should always give him some cred

He discovered a lot of things,

Which turned out to be true.

He was born to Vincenzo,

Who always wore a bow.

His mum was Marina Gambla,

Who was nothing but an ordinary mum.

Maria, who was a nun,

Vincenzo, who was named after his dad,

And Livia, who also became a mum.

He did a few great things,

He showed his work to a few kings.

Instead of discovering goons.

Saturn’s rings was a delight,

And the sun was so bright.

He found that the Sun was the centre,

Instead of the Earth.

So decided to put him in prison for his misery.

He was in prison for eight years,

Until he passed away.

He was buried in the Santa Croce,

Where his father was also buried 200 years ago.

His daughter felt the grace,

And his family was a flow.

Flow =  descendants after each other

Might’ve failed on that hill

He brought his country together

Churchill may have done some bad things

He liked to drink and smoke

But that never brought his confidence down

His mark on humanity will never go away

Of what he did in his war days

Being Prime Minister in a dangerous time

His impact on our life is significant

If it were not for him

The results would have been grim.

Churchill has inspired us all

Through the good and the bad times

Even if he had to do some not so good things

He brought his country together

Thank you Winston Churchill for being the person you are and inspiring millions.