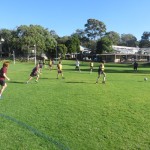 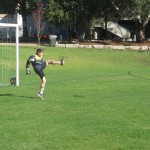 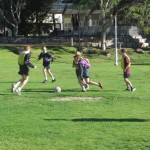 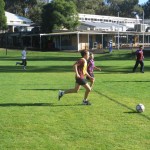 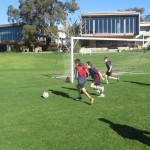 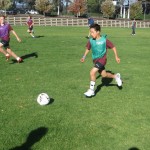 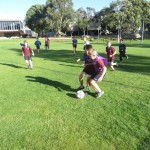 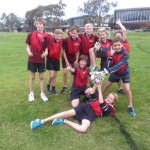 The ball shot towards Connor. He swatted it away to Harry, keeping the scores level. Harry passed to Lochie but his shot at goal was blocked. Mansfield McKie nonetheless won a corner. The boys lined up but the kick was poor. Undeterred, Charlie and Ash rushed at it and seconds later the ball hit the net. With two minutes remaining in the final game of the tournament, the boys in Red had taken the lead in a must-win game.

Mansfield McKie won the Year 7 House soccer tournament with their victory in the final game, snatching the lead from Somner Stewart, who had led all tournament.

Somner Stewart hit the ground running, with Dylan Cleal and Ben Bizley starring throughout the tournament. In fact, due to a comical mistake in their first game, Somner Stewart scored all three goals in their opening 2-1 win over Dann Watt. They finished the tournament with two wins and two draws.

Dann Watt held their opponents well. Fred Lever and James Manson controlled the midfield well. Aidan Gillis was especially fearless in defence and took an accidental ball to his face while blocking a penalty kick. He kept the ball out of the net to keep Dann Watt level with Butterss Cross in the final game, allowing them to finish ahead of Butterss Cross in the final standings.

Butterss Cross found their feet after a slow start. Alessandro Franco was outstanding in attack and in defence. Adam Choong was another standout for his team, especially in defence.

Gordon Grant needed a win and favourable goal difference to win in the final match. Unfortunately, Mansfield McKie snared it just before the whistle blew. Nonetheless, the team competed hard all throughout the tournament. Oliver Huang seemed to be in three places at once at all times due to his on-field presence and Will Penman was hot on the heels of opposing strikers from the very beginning.