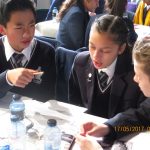 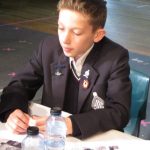 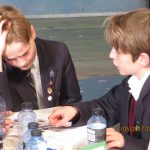 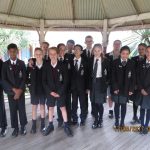 On the 17th May, a group of 15 Year 7 boys and girls went to the Methodist Ladies College to compete in the annual da Vinci Decathlon. We were split into two teams. The Decathlon focuses on a variety of different activities and subjects including Mathematics, Science, Engineering, Art and Poetry, Ideation, Cartography, Creative Producers, General Knowledge, Code Breaking, English and Spelling. We were up against another 20 teams from various different schools in our region. The theme of this year’s Decathlon was ‘Power’.

We hopped off the bus and quickly rushed into the hall as we were a bit late. We were given a brief introduction and suddenly, MLC students came around to our tables giving us folders with the worksheets for the first period of the Decathlon! Our first bulk of work included Science, Spelling, English, Ideation and Art and Poetry. We set off to work with the pressure building, but most of us were really enjoying ourselves at the same time. Mrs Watkins was kind enough to give us a whole bowl of jelly beans and party mix while we worked! The 75 minute period was up and we handed our work in. After a quick break and a piece of cake out in the foyer, we were back in the hall ready to take on another three subjects.

Maths, Creative Producers and Cartography tasks were put in front of us for the second period of the Decathlon. Each of our two groups selected three people to participate in the Creative Producers category. My group selected Elliott, Mark and Olivia. The teams were given a strict guideline and rules and had 10 minutes to create a 60 second or shorter play with the theme of ‘Money’. All the Creative Producers were pulled out to perform their play in front of judges and then came back into the hall and started working on the challenging tasks once again. Our time was up and we handed in our work and set off to have some lunch and get some fresh air. We socialised with each other and had a great time but that was not why we were there! Teachers called us back in and we began our last set of tasks.

Our last tasks consisted of Engineering, Code Breaking and General Knowledge. We selected Mark and Abby from our group to work on the Engineering task,  where they had to create a prototype out of certain materials and had to draw a design brief and what their inspiration was for their creation. They were given a shorter amount of time to complete this task. The General Knowledge task was based on important historical events and Aboriginal culture and history. We ranked quite highly in the General Knowledge task finishing 7th overall out of 22 teams. The announcement was made and we were told that the Decathlon had officially come to an end! Sighs of relief echoed through the hall and we’d completed the 2017 daVinci Decathlon. We got a quick break, and then the top 3 placing teams were announced for all the categories. The top placing team in each discipline received a gold certificate and the top 3 overall placing teams received a certificate, bronze, silver and gold. The top two placing teams in the Creative Producers discipline got up on stage and performed their money related plays! The other Tintern team finished equal 3rd overall in the Creative Producers, well done to them. The tiring day had come to an end and we were ushered out the hall, ready to get back to school.

We had a fun and eventful bus trip home and Mrs Watkins gave us all chocolate! When we arrived at school, we parted our own ways eager to get home and get a good nights rest.

I would like to thank Mr O’Brien for driving the bus, getting us to MLC and back to school and taking care of us on the day. I’d also like to thank Sayani, Freya, Zoe, Jonah, Oliver and Joel for helping us on our training days and giving us great advice. Wow, Mrs Watkins! Thanks so much for organising our training days and making this whole experience possible. We all had a great time and benefited from this experience and we’ll look back at it for many years to come. Also, well done to everyone who participated in this years Decathlon, you made it all a really fun experience and I’m sure many of us would like to do it again in Year 9.