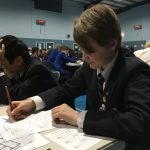 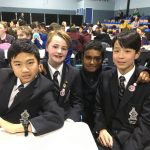 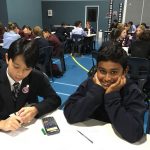 On the Monday 4 September 2017, eight Year 7 students participated in the annual Maths Games Day at Mount Hira College in Keysborough. 60 teams were there from various places around Victoria with four participants in each group. The staff at Mount Hira gave us a traditional Muslim song and ceremony before the start of the day.

Our first activity of the day was a warm up in which we completed a Japanese ‘sudoku’ named KenKen. In the corner of various boxes was a number and a symbol, for example +3. This meant you’d have to have two numbers next to each other that added up to three without using the same number twice in a horizontal or vertical line. This was relatively easy for most but now the real thing started. We were given 45 minutes to complete an 18 question sheet with algebraic and counting questions. We set off to work and found the first 10 or so questions quite easy but the next were extremely challenging. We finished the sheet just in the knick of time and it was then time for a quick recess.

Now for the next game. We were given a brief tutorial on how to play certain maths game and had to move around table to table individually playing students from other schools in order to earn points. The games we played were Chasing Zero, Honeycomb and Pentagon. 10 points were awarded if you won, 5 if you drew and 0 if you lost. We regrouped after playing 3 games each and shared our successes or losses in our games. Now it was time for lunch being 15 minutes ahead of time and therefore getting more lunch time!

Now for the last and quite possibly the most challenging activity of them all, the relay. In your teams, you were given questions and had to answer them. Then a team member has to return it to an adjudicator and would receive the next question if the answer was correct, if not, you would return with the question and had to answer it again. After a fast paced and exciting 10 minutes, we’d completed our last activity. William was puffed after having to run so much! A man then played traditional Turkish music on the Bağlama, a Turkish guitar.

It was now time to announce the podium standings. The girls’ Tintern team did an outstanding job finishing as the 3rd highest team out of 60 with a total score of 225 points. Then 2nd with 235 points and 1st being Mount Scopus with 240 points sealing a close victory. It was then time to head back to school with a great, big box of Maltesers for the trip home!

Well done everyone who participated in the event making it a good fun experience for us all. I’d also like to specially thank Ms Stewart for driving us there and back and Ms Tillyer for helping us out and making the whole thing possible. I’d also like to thank Mount Hira College for their hospitality on the day and the presenter for making some great jokes. Overall, it was a great experience which really boosted our confidence and knowledge in maths. I’d highly recommend this event to other incoming Year 7 students.