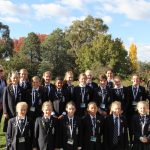 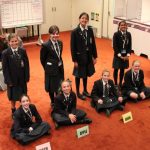 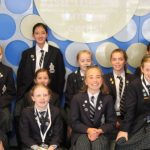 Year 6 Girls recently visited Canberra where they had the opportunity to participate in a variety of educational programs with a focus on Australia’s history, culture, heritage and democracy. The activities and programs that they undertook helped them to learn about Civics in a very enjoyable and interactive way. Highlights were the Australian War Memorial where girls placed a poppy beside the name of a loved one or another soldier they had researched. They felt very touched by the whole scene there. Parliament House, especially in question time was very entertaining! Other places they visited were the National Museum, National Capital Exhibition, Questacon, The Royal Mint and the Botanic Gardens, where by chance they got to meet The Governor General.

A bus tour of the embassies and Yarralumla and Lake Burley Griffin was enjoyed on the way to the airport. The Australian Government recognises the importance of all young Australians being able to visit the National Capital as part of their Civics and Citizenship education. To assist families in meeting the cost of the excursion the Australian Government is contributing funding for each student under the Parliament and Civics Education Rebate program towards those costs. The rebate is paid directly to the school upon completion of the excursion. Please enjoy the reflective writing the girls completed upon returning from Canberra. It certainly was an informative and enjoyable week. Canberra was looking particularly beautiful with all the autumn foliage and we had beautiful clear, sunny days.

by Kathy Agius, Year 6A Teacher

We woke to the frosty morning and cold wind outside our window. We very quickly got on and packed up the bus and headed to the Royal Australian Mint.

The amount of coins that have been produced was astonishing – over 15 billion coins have been produced since the Mint opened. We watched Titan and the other robots do their jobs – lifting barrels of coins, stamping, packaging, etc.

The blood – red colour of the poppies reflected into the sunlight; the wall engraved with the soldiers’ names lost in war. The tranquillity of the memorial seemed to bounce off the walls enveloping everyone into a sense of mourning and peace. This was the scene at the War Memorial.

Parliament House – The shining quarts pillars and stairs shone in Parliament house, as though they had never been touched. Politicians crowd the main entry, – the 2700 clocks buzz, the ringing noise echoes through the massive building, although the water fountain still doing its job so no conversations could be heard throughout the building.

These are just a couple of highlights from an action packed camp experience in our National Capital.

Canberra was where we stayed for Year 6 camp.

A highlight on the first day was The Electoral Education Centre.

Next day came around and we went to the Mint and War Memorial.

But day three was even better we went to Parliament House!

Everyone in the class laughed or was shocked at how rude everyone was at Question Time.

Reginald William Goldsmith was the Man I researched and put a poppy on.

A lot of brave men fought in the war and my Great Grandpas were only two of them.

Relaxing times while in bed.

Electoral education office taught us how to vote.

Heating in our cabins kept us warm.

Interesting stories/yarns were told by James and Will.

Lots of trees cover the camp.

Lollies were given out on the plane.

Sleep was needed after the hike.

Capital cities are in every country.

Beautiful views all around us.

Education was our biggest priority.

Remember those who died.

Australia is a great nation.

My Experience at Canberra

Canberra is the magnificent capital city of Australia and many people go there to have fun and learn about it’s history.

Anzac Day and war related stories, objects and soldiers are all shown at the War Memorial. It is amazing hearing all the stories of young soldiers, but it is also quite sad.

Nothing is better then learning science in an extremely fun way, especially when it provides a drop slide, caged lightning, moving floors and much more exciting stuff. Questacon is a better version of Scienceworks.

Beautiful old buildings are abundant; some of them with lovely gardens too, like the old Parliament House with it’s Senate garden.

Reflecting back to the war is what some people do at the war memorial, as they might have lost a loved one in the war.

Respecting the people around you when you visit the war memorial is very important because imagine if you lost a loved one and were remembering all the good times and sad times together and then someone ran past yelling.

A very amusing place to visit is Parliament House at Question Time(especially after the budget).The opposition asks the government questions, not very kindly mind you, and then the government yells the answer back. If the opposition don’t agree they’ll interject.

Activities were fun and interesting

Everyone was excited the night before about the things to look forward to for the next day.

Ridiculous attitude from the people at question time.

Really trying our hardest at all times.

Active every day from going one place to another

C -apital city of this nation

B – eautiul views all around

E – ducation was the biggest priority

R – emember those who gave their lives

A – ustralia is a great country

Gloria the wombat was brought up by humans.

Relaxing in our cabins was a good way to get us through the rest of each busy day.

Employees made us feel welcomed and comfortable.

Nght time was thrilling as we enjoyed the night walk and the welcoming fire.

Honeybun the brumby surprised us by approaching quietly at the campfire.

Inviting cabins made us feel more at home.

Little groups worked together on constructing a future building out of lego.

Looking at the view and the wildlife was a great experience.

Senate gardens was a peaceful place to enjoy our lunch.

Amazing place to have camp

Never disappointing me in the activities provided

Bothering cold temperatures in the city

OUR ACCOMODATION AT GREENHILLS

Great cooks made our amazing meals

Relaxing nights helped us get through busy days

Every night going to the hall and playing fun games

Honeybun the brumby surprised us around the fire.

I enjoyed trying to figure out the game Black Magic

Leaving on the exciting Murrays bus with the hilarious driver Mark

Listening to funny stories around the blazing fire

OUR CAMP TO CANBERRA

An amazing and admirable city

Nothing better than to see the beautiful wildlife

Exciting and enjoyable places to visit

Rose perfumes, floral in the air

Remember those who gave their lives

Cereal and a hot breakfast is a good way to start off a busy day.

Animals and wildlife are very common in and around Canberra.

Never have I seen such beautiful mornings.

Being engaged with how they made coins at the Mint.

Round Lake Burly Griffin has a walking track.

Relaxing and listening to the gentle rustling of the trees is calming.

At the end of the day everyone went to sleep and all was silent.

Staying at Greenhills in Canberra

Responses to the cabins were positive

Educational is how I describe the site

Sunny in the afternoon surprisingly

Canberra is the capital of Australia.

Australia is a good country.

National War Museum is where we placed a red poppy.

Botanic Gardens is where we saw the Governor General.

Every day was busy.

Reading about the Governor General helped me improve my reading.

Representatives of the government help to make laws.

At Questacon the drop slide was very fun.

Canberra was an amazing and a great opportunity.

Animals were wild but friendly.

Night hike under the stars.

Emu and the Kangaroo are native Australian animals.

Remembrance of the soldiers.

Relaxed in the cold weather.

Arrival to Canberra was great and not bumpy.

Gloria was the local wombat

Relaxed and chilled in the cool environment.

Emus were in the aboriginal museum

Echidnas are native and come back a long way.

Newdelegate Street is near the Australian Mint

Hiking at night while the wildlife was still awake

Lamington Street is near Newgate Street

Lit fire with the roasted marshmallows

Sites that we saw were extraordinary

Today morning, we visited the Mint! It felt so strange to think that this was where the money in my pocket came from, and that when we walked up the beautiful marble staircase, we were literally walking on 750 dollars! We learnt about blanks, which are the blank coins that they stamp, uncirculated coins which are collectables that aren’t actually used for selling or buying purposes, and Australia’s currency’s history.

Then we stopped by the National Capital Exhibition, which was so compelling because it made me comprehend that Canberra was and is literally an almost completely man-made city, except from the wildlife and greenery, though some of that was planned too!I learnt that there were several feasible designs, but when it came to choosing it was the simplicity and minimalism that won over Walter Burley Griffin’s creative design.

To finish off our perfect day, we went to the War Museum. It was touching, and displayed perfectly what war was actually like; dark, melancholy, merciless. The mysterious, dark lighting captured the tragic tales of the deceased, the quiet recording whispering the voices of the frightened and the mourning. I really felt the emotions of the bad times of conflict; tiredness, despair, hunger, loss, the feeling of wanting it all to just stop. All of these emotions were clearly represented by the sculpture, ‘Winged Victory,’ which showed a lady holding a sword above her head, symbolising that they had won the war, yet her face showed such sadness as she read the long list of names of the lost souls from the soldiers in their final battle.

The second day was over, as the sun set over Greenhills, and we were ready for the next big day.

Can you design Canberra?

Not as busy as other states and territories

Being the place where the Prime Minister lives

Gloria the half blind wombat

Ready made, delicious hot food at the cafeteria

Honey-bun the half-blind horse of Will

Lunch is wraps and sandwiches

Lollies are given to teachers for safekeeping

Round coins used to be produced