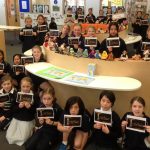 Multiculturalism, Geography, Research, Technology, Literacy and Public Speaking were all aligned in Year 5 this term as we held our second TOSCARS  (Tintern Oscars) Film Premiere.

Beginning with a random selection of a country and a list of criteria, students starting researching the national dress and created individually named characters, resplendent in costumes.

Their research brief included world location as defined by latitude and longitude, references such as the equator, international dateline, time zones, tropics, hemispheres and continents.

Geographical features, language, currency, climate, traditions, foods, occupations dependent on agriculture and exports etc. were also included and turned into a creative, fictional character script, with a family life, personality, and a background story connected to their country.  On the way, there were some eye-openers, such as the rights and conditions of women in cultures very different to our own.

Of course, all the literacy demands at this level were challenged, good sentence construction, punctuation and paragraphing. Most students completed at least 3 drafts, with even the recorded copy undergoing further editing before publication.

Filming was our next challenge and completing 24 films in 3 sessions was a testament to the respect and maturity of each student. We filmed in the classroom, using the green screen, the Do Ink app for IPad and a collection of images sourced to complement the script. The students then edited their films, uploaded them to the school One Drive, where, with help from the IT department they were converted and linked to the PowerPoint format used at our Film Premiere event.

Topped off with popcorn and ice-creams for real cinematic authenticity, the students ran the evening, presenting TOSCAR awards for script writing, editing, cinematography and of course, costume design, all to a totally enraptured audience.