Phillip Island camp was a great experience. It was loads of fun. I thought surfing was the best activity. Surfing instructors taught us how to get up on a board. Most of us managed to stand up and catch waves. Surfing for the first time is definitely going to be stuck in my memory for a looooong time. – Theo Lam

I liked ‘Amaze n Things’. The optical illusions and mirror maze were great fun. I finished the maze first. Mini-golf was really good – I liked how it all worked. – William Jones

What I liked best about camp was that everyone had a go and there were loads of activities to do. It was nice that we could all go down the beach and have fun playing with the shovels and buckets to make sandcastles. – Jack Gale

My favourite part about camp was the surfing. Everyone had a go and stood up on the surf board – except for Mr Kenny! My other favourite thing was playing the game “Golden Sceptre”. It was so much fun defending the ball and running around trying to get the opponents ball into our half. Camp was great. – Flynn Hutchinson

Camp was such fun and surfing was the highlight for me. The cabins were average and the food mostly good. There was plenty of fruit and drinks too. I liked the walks after dinner and “The Golden Sceptre “game was fun to play at night. – Jacob Millett

On the first day, we went to the beach. We had a choice of either playing on the beach or going in the water. Some people played beach cricket, some dug holes or made sandcastles and some swam in the water. Everyone seemed to have lots of fun. After a while, the instructors came down and asked if anyone wanted to go boogie boarding. Five people put on wet-suits and head off. Overall, it was great fun. – Will Kenny 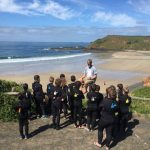 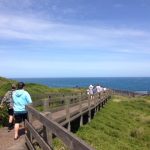 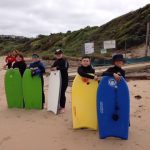