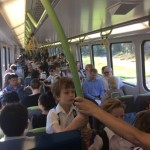 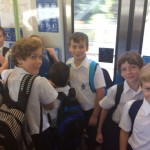 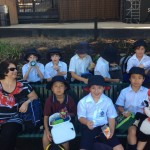 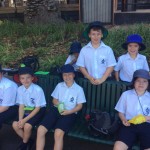 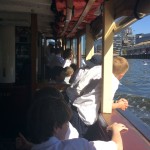 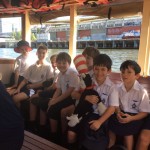 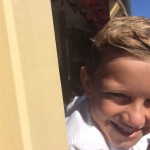 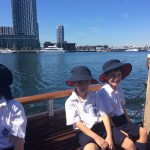 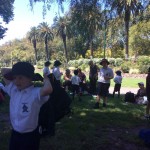 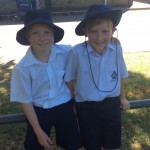 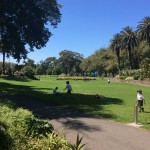 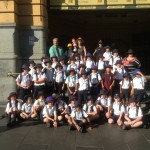 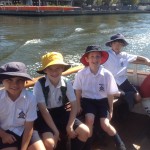 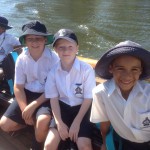 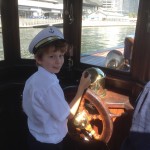 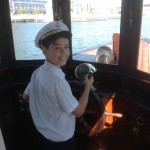 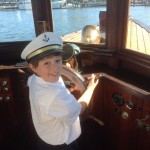 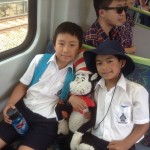 On Tuesday 2 March the Year 3 and 4 classes ventured into the city as part of our Integrated Studies unit on Cities.

We all congregated excitedly at East Ringwood station with our four teachers and two parent helpers. The crowded train was a buzz with excitement and the boys displayed wonderful manners by insisting that all older passengers sat whilst they stood patiently.  A number of members of the public commented on their excellent behaviour and some even struck up conversations with the boys.

Departing at Flinders Street Station we all posed for the obligatory group photo under the clocks before walking down besides the Yarra River opposite Southbank where we stopped for Morning Tea. It was then time to cross the bridge and head to the dock where we would take our boat ride.

We then boarded the historic MV “Grower” ferry.  Built in 1924 the “Grower” is the oldest vessel currently operating the upper reaches of Melbourne’s waterways.  Each boy took turns steering the ship and a lovely refreshing breeze kept everyone cool.  The breeze did bring with it some excitement with a boy’s hat being blown overboard requiring a quick turnaround and then a deft pluck from the river, by the captain, to retrieve the now sodden hat.  Alas, the captain’s own hat was the next to go overboard and this time the quick turnaround failed to spot it.  After giving up and returning back on our course the boys at the back suddenly chorused that they had spotted it downstream. The eagle eyed boys proved accurate and the captain was soon back in full uniform and returned us all safely to shore.

A short walk to the Alexandra Gardens followed where we had lunch and a quick play before heading to Federation Square where we filled our drink bottles and headed into ACMI the Australian Centre for the Moving Image. A wonderful time was had viewing all the interactive displays on offer and it was only lack of time that stopped us staying even longer.

From there it was back to Flinders Street for the train back to East Ringwood and a short walk back to school for an exhausted but happy group of boys, teachers and parents.

A special thank you goes out to Mrs Sparkes for organising the excursion, Mrs Casey and Mrs Dell’oste for assisting and Mrs Chisholm and Mrs Wicklein for being such fantastic parent helpers.