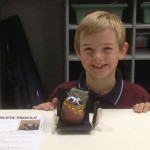 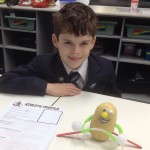 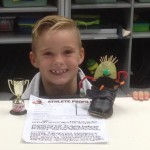 As part of the Year 3/4 Integrated Unit of Study, the boys have been tremendously engaged in their preparations for the Spud Olympics. It began with a homework task where each boy was to create their spud athlete and complete an Athlete Profile including details such as the spud’s previous sporting highlights, future goals, hobbies and family background. The boys presented their Spud Athletes to the class and they have been very creative! We have a range of sports represented such as archers, sprinters and soccer players with some very inventive names such as Spuddy Von Basketball, Jimmy Mash and Francis French Fry! I In teams, they have been working on designing and constructing an event that all the spud athletes can compete in and must be one that is included in the 2016 Olympic Games. There are so many things to consider when creating the event: the logistics of event, propulsion of the spud, ability for all spuds to be able to compete, the finer points of scoring and availability of equipment. Each team has had to adjust and adapt their ideas several times before the ‘eureka!’ moment has been reached. Importantly, there has been a lot of creative and flexible thinking from each one of the boys as well as great co-operation within the teams. We are all keen to see these fine athletes in action at the upcoming Spud Olympics!