The Duke of Edinburgh Award in Action in Boys’ Middle School

The Duke of Edinburgh’s Award is an internationally recognised award that invites young people aged 14-25 to realise their ambitions and to change their world. Run in over 130 countries, the Duke of Ed is designed over three levels: Bronze, Silver and Gold. To achieve each level, young people create their own unique program of activities over a set length of time across four sections:

Young people challenge themselves by choosing activities that spark their interest in each section and setting their own goals. The Duke of Ed is about individual choice; young people tailor their award and develop their career aspirations as they forge skills that go beyond academic success.

Finn Cussen is a Year 9 student who has just finished his Bronze Award (a 3-6 month commitment). For service, he helped his sister’s football team, the Vermont U14 Eagles, as a boundary umpire. For physical, he improved his fitness whilst learning how to play tennis with the Warrandyte Tennis Club.

Finn chose very interesting activities to fulfil the skill section of the Bronze Award. He was keen to do some woodworking and started out by taking two courses in woodturning. The first course was an introduction to using a wood turning lathe and the tools needed to create a wooden pen. In the second course, he made a bowl from a block of wood. He enjoyed learning how to use the equipment and tools and enjoyed the feeling of sculpting wood to create an object. His second activity was to complete the building, finishing and painting of a Micromouse boat. Finn began this project a few years ago in Scouts, but was unable to finish it at that time. He completed the building of the boat following detailed plans found online. He used a power saw to cut out the different sections of the boat and learnt how to use marine grade nails as well as PU stitch-and-glue. He used a power sander to smooth the surface of the boat and then he primed and painted it. He chose a tomato-red colour for the paint and stencilled the name “SS Tomato” on the bow. 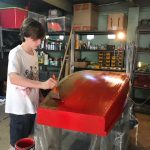 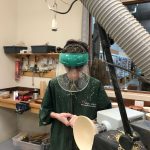 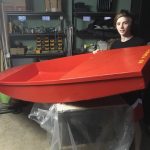 Ryan Noble is another Year 9 student who has just completed his Bronze Award. Ryan is a member of the U16 Nunawading Kangas basketball team. For his physical goal, he chose to improve his shooting and stamina and to apply a particular ‘play’ or strategy to his game. For service, he volunteered at the Epilepsy Foundation Charity Shop in Blackburn where he helped sort, fix and sell products and serve customers.

Ryan also chose a very interesting activity to fulfil the skill section of the award and spent 30 hours creating an album cover for a fellow classmate’s digital music CD. To achieve his goal, he used the PaintTool SAI program and Photoshop and drew inspiration for the design from the work of Porter Robinson, an American DJ, record producer and musician. Ryan enjoyed the creative process and learnt how to use the programs, how to blend colours and use layers. He also developed the ability to collaborate with another artist; a process in which one discusses a concept, puts forward an idea, completes a first sketch, receives feedback, reworks the idea and gradually develops the final product. Ryan’s friend and musician, Coby Mill, is very happy with the completed design for his CD cover. 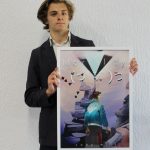 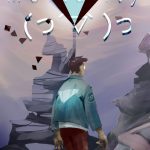 I congratulate Finn and Ryan for committing to the Duke of Edinburgh Award and for completing their Bronze level.