The Mogul Ski World Victorian Interschool Championships will be run at Mt Buller in August this year. Cross Country takes place on  7 August and downhill on 22 -28 August. If your child is a keen skier or snowboarder and is interested in competing this year, please email Kathryn Brentwood kbrentwood@tintern.vic.edu.au to register your interest.

On Sunday 24 April we had five students representing Tintern Grammar at the 2022 Run the Tan event.

The students ran exceptionally well and were placed in the top six in their U14 girls and boys categories. Avie did really well too and came in 1st in her category for U14 girls in the schools event.

Congratulations to Brady Cochrane (Year 8) for his debut in the 2022 St Kilda Victorian Wheelchair Football League. Brady won the ANZAC Day Medal in the club’s opener after an impressive performance in his first game. A great start to his footy career!

Brady has been playing wheelchair basketball since he was 8. He plays in an adult league and a number of the players from his and other teams play in the Victorian wheelchair football league. They had been saying to him for years that he should enter the draft for football.

He loves his basketball but this year decided he would got to the league try outs and just see what happens. He went to one session and after that we had 3 clubs approach me showing interest in recruiting him. Rather than commit to a specific team straight away he decided to enter the draft and see what happened.

St Kilda took him with their first draft pick and he was 3rd pick in the whole league.

The first game (the ANZAC Day round) he was nervous but he went out and played in the Reserves game as the centre (ruckman) and really took charge. That resulted in his receiving the ANZAC Day medal even though his team lost.

He had played so well that they had him play in the Seniors game which was right after the Reserves. So 2 40 minute games one after another. Again he played really well. Apparently all the teams were very impressed by his skill, leadership and attitude at such a young age.

He is looking forward to growing his skills and maybe one day making the Victorian side. Being part of the actual AFL as an adaptive sportsperson is important to Brady. Showing people that having a disability doesn’t mean you cannot achieve great things is always at the forefront of Brady’s life.

You can read more here. 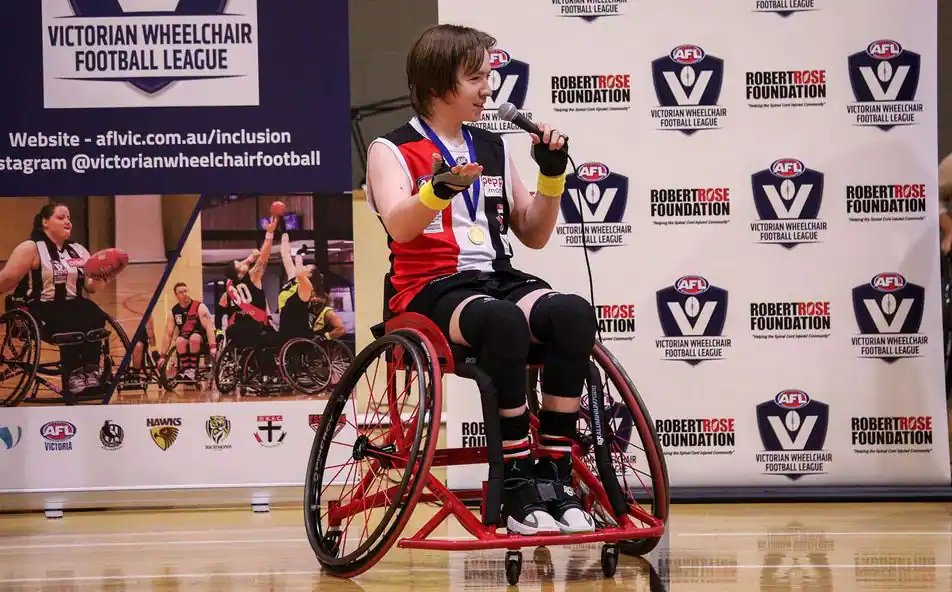