Richard Colman is an Australian Paralympian. He was born with Spina bifida. Spina bifida is when you’re born with an incomplete closing of the backbone and surrounding membranes. He represented Australia at the four Paralympics – 2004 to 2016. He competes in mainly the T53 categories for events like the 200m, 400m, 800m, 4x100m relay and the 4x400m relay. He has won two gold medals for Australia, one in the 800m in Athens 2004, and the other in London in 2012 for the 800m as well.

Richard came in and talked to the whole Year 8 level about how much practice and effort you need to put in if you want to achieve your goals in life. Using examples of his own practice routine from waking up to crashing on his bed after the end of an exhausting day of exercise and work day after day. He inspired us not because he’s a wheelchair athlete, but because he continued to press the fact that we shouldn’t see him as an inspiration just because of his physical disabilities, though, see him as an inspiration because he would always put in the extra effort to be the best he could be as a person. He taught me as a person to always put 100% effort into everything I do even if it’s as little as getting an A+ on the next math test.

We’d like to thank Richard for coming in and taking the time out of his day to talk and inspire us. 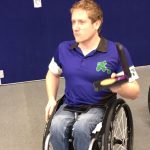 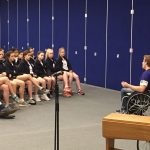 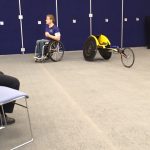 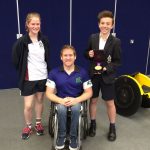 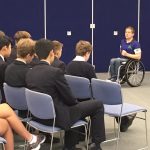