It’s been really great to see the boys starting to be able to be outside at lunch and recess as the weather starts to provide a bit more sunshine and warmth; it makes such a difference to everyone’s attitude and happiness when the sun is out. As the term draws to an end our boys are still working hard at completing set tasks for many subjects whilst also preparing for end of year assessments and exams. In their pastoral sessions they have been working on study techniques in order to find the best way for them to be prepared for such assessments, an important process to begin in the Middle School before they start their journey in the Senior College.

On Friday 11th we paid or respect to Remembrance Day by having our annual service underneath the flagpoles near the Junior Schools. The service was really fitting with reference to the youngest soldier know to have served for Australia being Private James Martin who lied about his age when enlisting by saying he was 18 when in fact he was 14 years and 3 months; a Year 8 boy of today. The poem ‘In Flanders Fields’ was read as well as the laying of a wreath by our Vice Principal Mr McManus, followed by the Last Post and The Ode of Remembrance.

There is still plenty of things going on for our boys and it will remain extremely busy for them right up until the 8th of December when they finish up. We have a camp for Year 9s, End of Year Program (EYP) for Year 7s & 8s, transition for Year 9 into Year 10, and then the final day activities on the 8th including assemblies, reflections and the annual Southwood Ironman. Please keep in touch with your boy’s Pastoral Mentor if you have any questions regarding the end of year.

On the 28th of October, the students learning Chinese went to Chinatown for the day. We started off by going to the Chinese Museum. First we learned about how the seismograph was invented and then about Jade Burial Suits. We then went downstairs and found out about the gold rush and saw the 63 metre long dragon that was used for Chinese New Year and Moomba. Next, we learnt how to make Chinese knots which was really fun. After the museum we walked to a restaurant where we ate lunch. On the menu was spring rolls, dumplings, sweet and sour pork, lemon chicken, Chinese sausages and fried rice. It was then time to go back to school. It was a really enjoyable day and we learnt a lot.

By Oliver Huang and Joel Dunn

On Wednesday 2nd November the Billy Cart Day was reintroduced to the Year 8 program. This is something that begun back on the old campus but was lost during the transition over to Ringwood East. The day involved the boys forming into groups of between 4 – 5 people and then being given a billy cart kit. The kit included all the timber pre-cut and drilled, the wheels, axels, steering rope, etc. as well as a prototype out the front that they needed to copy. This occupied the first few hours of the day as the boys discovered (through a number of mistakes early on) how exactly to put the carts together successfully. Whilst this was occurring, some members of the group were busy designing a team logo and cart decorations that were printed off to adorn their vehicle. We had awards for best logo design, best looking cart, best team uniform, etc. as well as the team that was fastest around the track. Before lunch the boys brought their carts onto the tennis courts for some practice laps and testing before the big race. We also walked the track with all participants so they were aware of the actual course and any associate obstacles or dangerous corners. Lunch was provided for them including a heap of sausages, some chocolate, a can of drink, etc. before meeting back up on the tennis courts for the official time trial laps. These laps were around a shortened tight course on the tennis courts but still tested speed, endurance and driving ability. From here the carts were allocated a grid position for the actual Grand Prix around the school. The race itself was fantastic! It took the boys outside the tennis courts, around the gym, down the bus bay (Conrod Straight), back along the paths between our two ovals, before turning back up to the tennis courts and then repeating the lap again. By the end we had a lot of very worn out boys and only a couple DNFs (did not finish) due to their cart breaking. It was a really fun day that incorporated leadership ideas, collaboration, team work, fitness, hands-on, etc., but more importantly the boys had a good time together. 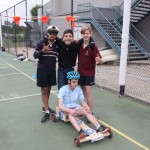 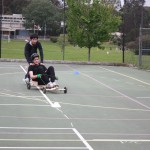 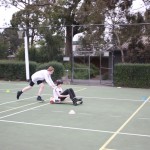 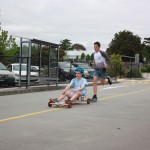 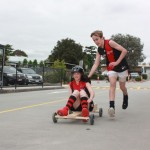 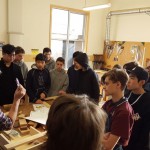 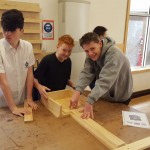