On Friday night 10 August, the Tintern Grammar music community came to school for our Annual Music Concert. The evening was highly anticipated, and there were performances from many ensembles – including all secondary school choirs, the bands, and various orchestras.

Highlights of the concert were Rubber Duckie, a Sesame Street favourite, performed delightfully by the combined boys choirs with their voices, rubber ducks and kazoos and the Senior Girls Chamber Choir, with ‘Puttin’ on the Ritz’, a jazzy call-back to Tintern’s Jazz Night held earlier in the year. Additionally, the combined Concert Band and Wind Symphony came together to perform ‘Terracotta Warriors’, a magical piece played superbly.

The evening was completed with the massed finale item, a Sister Act 2 medley which showcased a range of talented vocal soloists. The medley was conducted by Mrs Bezaire and accompanied by a band formed especially for the finale, which was led by Mrs Clarke.

The Annual Music concert was a wonderful opportunity for students to showcase their talent and commitment to music throughout the year, and was an enjoyable evening for all. In October, the whole school will perform the medley again at Tintern’s Celebration Evening – concluding the year most joyfully. 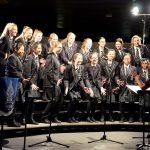 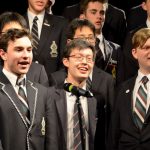 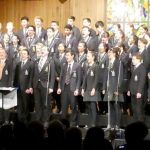 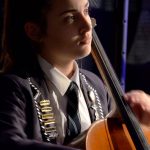 As a part of our World Music unit this semester, the Year 7 and 8 students were treated to a performance by Bernard Mangakahia. On the morning of Monday 13 August, we walked into the CM Wood and, to our surprise, there was an extravagant display of Polynesian culture. There was a range of things used for different types of dancing, as well as a brilliant map showing all of Polynesia. Bernard showed us his incredible dancing skills and even gave some of us the chance to have a go at using the hoops and the poi.

The American Indian Hoop Dance was the one of the dances which was performed. It is incredible to watch and has deep symbolic meaning. Each hoop used represents a challenge in life, and the dance typically is performed using up to 40 hoops.

Bernard talked a lot about his own heritage and his ancestry. It was very interesting to hear about all the different cultures of people from Polynesia. Especially how he knows all these incredible facts about the traditions of those countries. Bernard is also passing on what he knows about Mana people and heritage to his children, and many other children around the world as he travels locally and overseas with his performing show.

Then, after recess, Bernard directed students in 8A and 8D who are studying core Music this semester through a few dances, in preparation for our Year 8 Music Concert later this year. The girls learnt two dances. One was performed to the song ‘Hawaiian Roller Coaster Ride’ from the movie ‘Lilo and Stitch’ and the other to a song from the Disney movie ‘Moana’. We also learnt a dance using the poi, which some of us found difficult to co-ordinate. Bernard is an amazing teacher who was so helpful and excellent at explaining how to perform the more difficult parts of the dances. He was a great person, who is proud of his heritage. We are all grateful for having the chance to learn from him.

by Ellen Abajas and Aleisha Paul, Year 8A 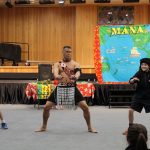 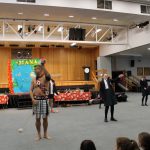 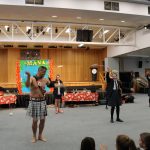 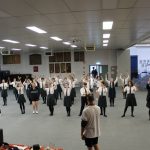 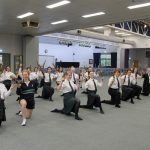