On a wet and cool afternoon last Friday 1 December, the Intermediate Girls’ Choir took a bus trip to the Ringwood Ladies Probus Club and sang some choral items for them. We sang a mixture of Christmas and contemporary popular songs and also had some instrumental groups performing on the program. The ladies really seemed to enjoy the concert, and then they put on a ripper of an afternoon tea for us. They definitely brought a smile to all of us and we all had an amazing time. 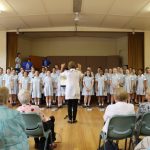 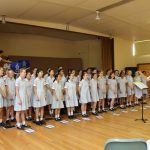 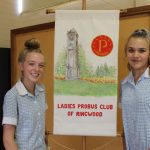 We munched and made marvellous music!

To end the musical calendar, Tintern Grammar’s annual Friends of Music Munch with the Musos was held on Sunday 26 November. This concert celebrates the talents of musicians spanning the entire school – this year involving, among many other ensembles, both junior and senior school choirs, the intermediate and senior jazz bands, and a monumental performance of Karl Jenkin’s Palladio starring all string players from the ELC to year 12. Preparing for this finale item was an enormous effort lead by Head of Strings Tim Veldman, supported by other staff, and it paid off; performing alongside peers and younger string players was rewarding and exciting. As well as festive music, the event provided time for socialising, eating, reflection on the past year, and a familial atmosphere that wouldn’t be possible without the incredible organisational efforts of the parents on the Friends of Music committee. On behalf of the performers, audience, and all members of the music community, I thank them, and the amazing music staff who lead each ensemble, for supporting this event year after year. 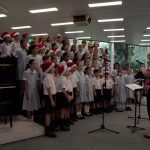 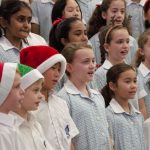 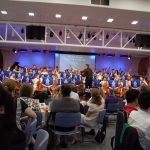 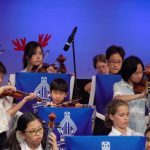 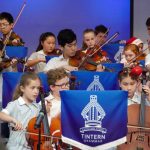 On 23 November, students from 8A and 8D performed in the Year 8 Performing Arts Night. They had practised their work (which consisted of singing, dancing, acting scenes, and instrumental pieces) throughout Semester 2. The theme of the event was “The Arrival”. The concert opened with a Mozart duet for Violin and Viola, followed by an impressive trumpet performance by Charlie Victoria.

The Chao Feng Orchestra of Melbourne delighted the audience by sharing four musical pieces, the last one featuring some Year 8 students who were instrumentalists. We then enjoyed some student-devised environmental advertisements for fictional products, such as ‘The Shrubbery Shot’, and ‘The Box Choy’. Musical items included a rendition of a Taylor Swift song, a saxophone solo and a tuba solo. Paige Anderson and Lauren Wooller performed a beautiful ballet duet called Run.

We were all involved in the class instrumental items. 8A performed The Arrival of the Queen of Sheba by George Frederic Handel and 8D Arrival by ABBA. 8A students also performed a class dance item: Time to Travel in Time, a combination of dance and acting scenes. The concert was concluded by both classes doing an Accumulation Dance to the tune of I Like to Move It from a film called Madagascar.

It was a very enjoyable evening.

by Aditi Hasabnis, Year 8A 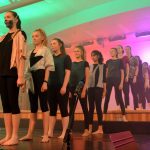 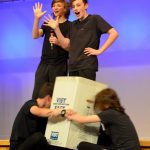 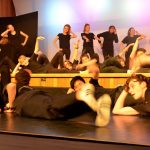 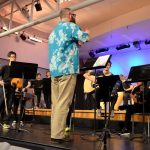 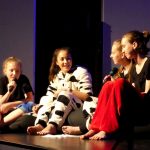 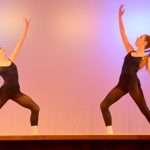 A reminder to all families with students who currently learn Instrumental Music to return your enrolment forms for lessons in 2018 if you wish to continue lessons in the new year. New Music Lesson enrolments for 2018 also are welcome at this stage. Please call Elizabeth Feenane in the Music Office (Ph: 9845 7837) if you have any questions regarding these matters or if you would like to receive an enrolment form for Music lessons in 2018.