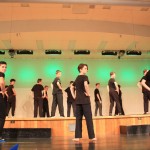 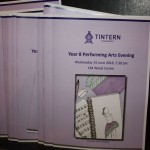 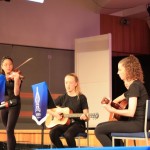 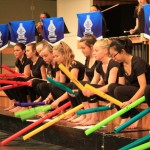 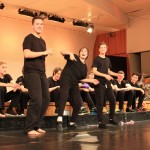 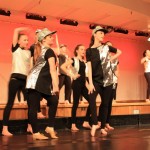 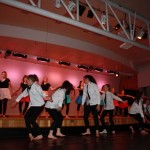 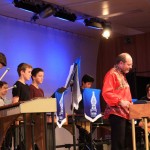 On Wednesday, 15 June, the last Wednesday of Term 2, the 8B girls and 8E boys performed at the Year 8 Performing Arts Night. The theme set for the dances, drama and music was ‘An Instructors Manual.’

The girls performed 3 dances, ‘How To Be A Heartbreaker’, to the song Heartbreaker by Marina and the Diamonds, ‘How To Be Lady Gaga’, to a mashup of Lady Gaga songs, and ‘How To Keep A Secret’, to the song ‘Secret’ by the Pierces. Each dance was choreographed by a pair or group of students who took ideas from the whole group. Each of the dances were introduced or concluded with a piece of drama relating to the theme of the dance. The scripts were written by script writers and, again, incorporated the ideas of the other students in the form.

The girls also presented 3 musical items, using their music as their Instructor’s Manual. The first piece used either classroom percussion instruments or instruments that we learnt in private music lessons. This piece, ‘Gypsy Medley’, was arranged by Sergei Golovko who accompanied us during the item. Sergei is a world famous Russian percussionist who visited Tintern at the beginning of Term 2 and gave a wonderful concert. We were very excited to welcome Sergei back for our concert and to hear him play a few of his concert items again. Our second piece was ‘Somewhere over the Rainbow’. Audrey Middleton, Eva Corcoran and Charlie Johnson sang the vocal parts, and the rest of the class played the boom whackers, as well as the piano and vibraphone. The final musical item by the girls was the theme from ‘James Bond’ and also featured the boom whackers.

We all had butterflies but we were proud of how we all performed on the night.

On Wednesday 15 June, the Year 8 8E boys took part in the Year 8 Performing Arts Evening under the theme of ‘An Instructor’s Manual’. The night kicked off with a memorising performance by Sergei Golovko. It was really amazing and particularly interesting, and reminded us of the where we drew the inspiration for our own performance. Some of his instruments were most unusual, including a curved sword which he tapped and flipped around to make clanging sounds in different tunes. It was interesting to have a taste of Russian culture and music from Mr Golovko’s home.

Our musical performance was a medley of Russian melodies. It went very well, with every member of the class showing off new musical skills. For the drama performance, we performed ‘The Evolution of Dance’. It definitely took some learning but in the end it was fantastic on the night we got some good laughs out of the crowd. Preparing for the performance was challenging, but I think at the end people patted each other on the shoulder and were happy with what they have done, and had a good laugh.

Stories in the Wall 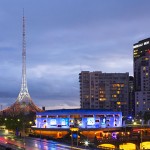 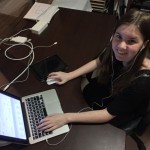 During the recent June/July holidays, Year 10 student, Brianna Oldmeadow, participated in an exciting composition project run by the Arts Centre Melbourne. Stage one of the project saw playwrights Amelia Evans and Dan Giovannoni sent into three Victorian Primary Schools to guide children in writing new plays on the theme Bush Tales. Nine of these plays were selected and professionally recorded in the Arts Centre Melbourne’s arts learning space, The Channel. The next stage involved Victorian Secondary School students, who were nominated by their schools, working as either a composer or sound designer to bring the primary students’ stories to life. Brianna was chosen to work as a sound designer. She reflects on her experience at The Channel with the following comments:

The project was a lot of fun. I was paired with another person who was the chosen composer, and we worked together to make both a sound track and to add sound effects. We used Sony Acid software and used the sound effects in The Channel library. Lachlan, my partner, used GarageBand to compose a soundtrack, and he did an incredible job of it too.

We had from about 9am until 3.30pm on Wednesday (6th July), but since we had not finished, I came back in on the Friday (8th July) and finished it at about 2.30pm. I had to wake up at about 5am both days in order to get driven to the city because of the disruptions to the train lines that week. Good thing my dad works in the city!

This was a really fun experience, plus the mornings at Southgate were gorgeous. I learnt about how directors will use sound effects and music to their advantage and make a really interesting scene. Despite the early wake-ups, I really enjoyed working on a sound track for a story and can’t wait until they release it at the Arts Centre.

The completed sound stories will be available for all to hear around the foyers of the Arts Centre Melbourne and online in September 2016. Each story is loaded onto an iPad which is then installed into an individual booth. I hope that if you are in the Arts Centre during September, you will pop in and listen to Brianna’s Story in the Wall.