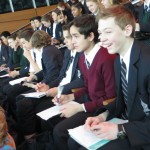 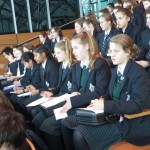 Many Middle School students will have read Leigh Hobb’s Old Tom or Mr Chicken books as pre-schoolers or early readers. During the excursion on Wednesday 30 August, we were entertained by Leigh and other writers who shared their journey of drawing and writing with the audience. Under Leigh’s instruction we all drew Old Tom and Mr Chicken. He then went on to help students create a character of their own. Bernard Caleo and Nicki Greenberg also walked us through their process of creating a graphic story. The Festival is a wonderful opportunity for students to hear from others who have been successful in the areas of writing and publishing, with many hints and ideas being given for those with a passion in this area. It may be years before we see the full consequence of an opportunity such as this, but it is very exciting to imagine where a young inspired person attending the MWF in 2016 may be in their literary endeavours in a few years from now.