Well done to the three Inter-School Sport teams who represented Tintern Grammar and Warrandyte South District in the Finals Gala in the first two weeks of term. Hotshots Tennis, Netball and AFL teams participated in the round robin format against the winning Schools from Ringwood North and Ringwood Districts. Whilst each Sport came up against very strong opposition in the finals, the Tintern Grammar teams displayed characteristic fair play, teamwork, and determined skillful play across all the matches. Congratulations to all of these students for being such outstanding representatives for Tintern Grammar. 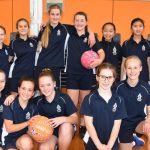