During assembly on Friday 14 September, 19 students received either their Bronze, Silver or Gold Duke of Edinburgh Awards. The awards were presented by Stephen Mason, Executive Officer of The Duke of Edinburgh’s International Award- Victoria and Mr Mahamed Ahmed, Programs and Engagement Manager.

The following students achieved their Bronze and Silver awards

The Gold Award is a very significant achievement and highly regarded in the community worldwide. Four Year 12 students received their badge in the assembly: Niamh Lewin, Tara McAsey, Ruby Wensor and Joel Williams. These students did not come through the Bronze or Silver program and commenced with the Gold award, which means that for one of their activities they had to commit to an 18 month program. The other two activities were 12 months each. The adventurous journey component was a minimum of eight days. In addition, each student undertook a residential project, which involved living away from home in an unfamiliar environment with people that they would not normally stay with whilst undertaking an activity for six hours a day. In all four cases, the students undertook projects within a community vastly different from their own.

Niamh Lewin and Joel Williams completed their residential projects just outside of Jaipur in Northern India in a Children’s village as part of the World Challenge program in 2016. They spent six days in the community and their program included helping with lessons at the adjacent primary school, preparing meals in the kitchens and playing with the children during sport time every day. In addition, they undertook two big construction projects – the laying of brick paths around the onsite craft center and the laying of foundations for a covered walkway from the village entrance to the school at the opposite end. The building materials were paid for by funds raised from projects held here at Tintern.

Ruby Wensor also completed her residential project in India during World Challenge. She spent six days at a rural primary school in Haripad, which is in Kerala, a state in Southern India. She spent time playing with the children and helped around the school, painting walls, gardening and helping local labourers with tiling and plastering the classroom. The money spent on refurbishing the school was raised by her team’s colour run, which was held earlier that year.

Tara McAsey spent a week at the Ntaria school for indigenous students in the Northern Territory outside Alice Springs in the September holidays in 2016. She stayed with a local teacher and worked with the students and members of the Indigenous community in order to understand social justice issues. She participated actively in the classroom and was able to learn about community cultural customs, traditions and events in the Western Arrernte Community. She also volunteered at the Hermannsburg Historic Precinct.

For Niamh, Tara, Ruby and Joel these residential projects will remain in their memories forever. Volunteering in such a capacity is a two-way exchange. Whilst these students may have left thinking that they were the ones doing the giving, they returned richer and wiser for their experiences with an understanding and respect for another culture and way of life.

The assembly presentation concluded with a video presentation compiled by Year 12 Gold awardee, Joel Williams, who said the following words after the video about what Duke of Edinburgh program has meant to him:

“Good afternoon everyone. My name is Joel and I enrolled in the Duke of Ed gold award at the beginning of Year 10. I chose to do the program mainly because I love hiking and camping and the adventurous journey component really appealed to me. The Duke of Ed hikes are different to the year level camps. They are much more challenging in terms of distance and terrain and we had to plan them ourselves. During these journeys, I developed friendships across different year levels because of the small numbers participating and I have many happy memories of the great times we shared. I would not have had the opportunity to explore such remote and pristine wilderness areas like the Walls of Jerusalem in Tasmania and the Australian Alpine National Park without the DoE program. Spending time in these environments has made me respect our magnificent country on a deeper level. Having been on five of the six Duke of Ed hikes over the past three years, I now feel confident to plan and execute my hikes in the future. I know what to pack, how to set up tents and tarps, how to read maps and use a compass and what food and emergency equipment to take over a multi-day journey.

Choosing swimming as my physical activity enabled me to keep my swim fitness at a level that would allow me to complete my Surf lifesaving Gold Medallion which I did in September last year, hence why I couldn’t do the sixth  Duke of Ed hike to the Victoria Ranges! Achieving my Surf Gold medallion enables me to work as a paid lifeguard on the Mornington Peninsula over summer. This qualification also gives me extra skills and knowledge to bring to my voluntary role as a surf lifesaver for Gunnamatta, a role that I have been fulfilling now for five years.

For my skill activity, I chose to set up an organic home vegetable plot from scratch. I built the raised garden beds to keep the rabbits out, and set up a greenhouse to plant and raise the vegetables from seeds. Every season of planting, I have made mistakes and lost crops, however, I have learnt from each problem and harvest time is now much more productive.

Even though I have completed my gold award, I am continuing with all three activities, as they are now part of my life.

Completing the residential project at Vatsalya Children’s Village in Jaipur India was certainly a highlight of the award and my life. We spent six days living and interacting with the 60 resident children and my favourite times were meal times where we sat at long tables on the floor in an open-air dining room and playing sport and games with the children every day from 4.00 -6.00 pm.

The Duke of Ed program has been a really positive experience for me. Yes, the record keeping and logging of hours can be tedious, but this forces you to reflect on your activities as you progress through the award and it makes you realise how much you have achieved over the years.” 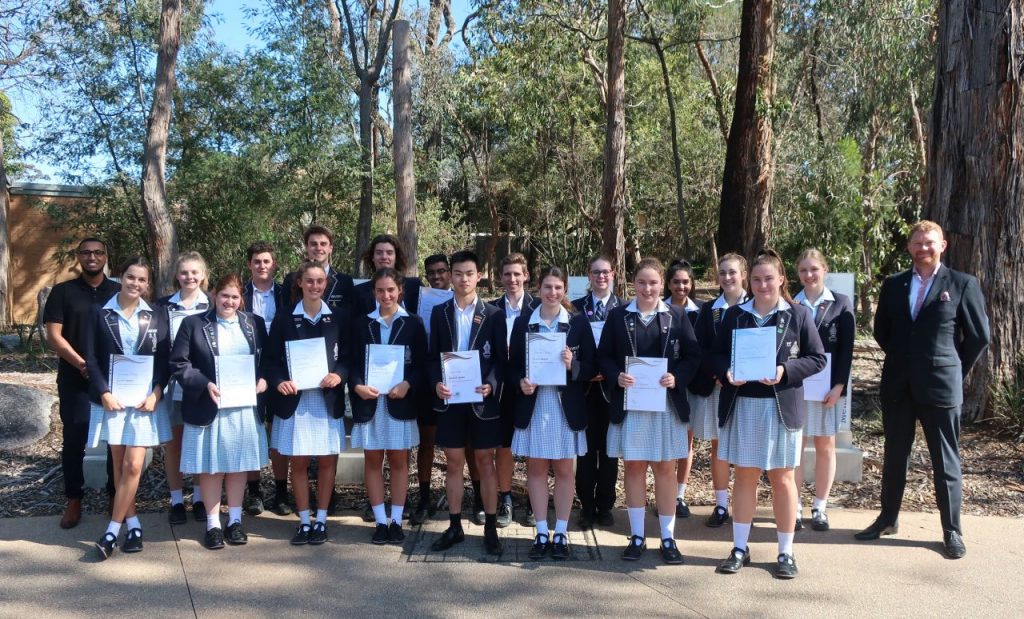