On Thursday 15 June, nine Year 10 students received their Bronze Duke of Edinburgh Awards certificates and badges. The bronze award is the first level of the program and involves a 3-6 month commitment plus 4 days of an adventurous journey.

Eliza Allen, for her skills section, constructed a fiberglass seat for her father’s go-cart and built an amazing metal fire pit for her uncle. Her physical goal was to improve her cycling to the point where she could achieve a 5 km bike ride. Eliza completed two service projects. She volunteered one afternoon a week at Ainslie Parklands Primary School aftercare program. On top of this commitment, she volunteered through the Maroondah division of the St John Ambulance at local events on the weekends, completing an amazing 72 hours of service in total. For her adventurous journey, she took part in the sea kayaking expedition to the Gippsland Lakes.

Olivia Adkins chose guitar as her skill and used the 13 weeks to learn a series of scales and to improve her soloing ability. For her physical activity, she worked on her decision-making and defence skills in netball. Her service was to the Ferntree Gully Days for Girls where she contributed by sewing drawstring bags and hygiene products. Olivia took part in the Mitchell River rafting expedition for her Adventurous Journey.

Gemma Bettess chose gardening for her skill with the goal of learning how to establish and maintain a winter vegetable garden. She produced delicious vegetables and herbs, which could then be used in cooking for her family. Gemma trained and competed with the Melbourne Cheer Academy Level 2 All Girls Junior Cheerleading team and a Level 2 All Girls Junior Stunt team for her physical activity and, for service, she volunteered at the Tintern Junior School aftercare program on a weekly basis. Like Eliza, Gemma completed her Adventurous Journey on the Gippsland Lakes as part of the sea kayaking expedition.

Olivia Cross chose to learn how to clip/hand shear sheep for her skill and used this skill when participating at the Bendigo, Geelong and Royal Melbourne Shows. For her service, she was a buddy coach for an Under 11 and Under 13 netball team and for her physical activity she undertook gym and personal training programs to improve her strength and fitness, as well as playing netball at an elite competitive level. For her Adventurous Journey component, she chose an exploration activity and spent 4 days at the Australian Wool and Sheep Show with the Tintern Young Farmers. During these 4 days, she was active in preparing and showing sheep as well as participating in the junior judging and helping other breeders with the presentation of their animals.

Molly Fleming chose music for her skill development and particularly focused on improving her tone production and vibrato playing on cello. For physical, her goal was to be an enthusiastic and encouraging team member of the Whitehorse Mustangs, and improve her basketball skills through trainings and Saturday matches. Molly’s service contribution was at Inala Village (part of Regis aged care facilities) where she used her considerable musical talent to perform to the elderly residents. Molly was part of the Mitchell River rafting expedition and loved learning new skills, developing independence and working as a team.

Madeleine Howell was one of five students who chose cooking as their skill and her goal was to be able to cook a three-course meal for her family. At the end of last year, she took part in a Master Chef style session where the students had one hour to bake a favourite dish to serve to the Maintenance team for afternoon tea. For physical activity, Madeleine worked on her dance routines with the view to performing them as well as possible and for service, she was the assistant coach for the Rangeview Rangers Under 11 Netball team. Unfortunately, Madeleine broke her finger and was, therefore, unable to attend the summer expedition last year. She had to find another Adventurous Journey to fulfil this requirement of her award. She did this by spending 4 days on a farm in Geeveston, Tasmania learning about all manner of farm activities.

Meaghan Hynson sought to improve her reading music fluency on guitar, playing jazz music and developing her improvisation skills. For her physical activity, she undertook weekly 2 hour karate lessons and her goal was to improve her Kata as well as helping other students at her club. For her service contribution, Meaghan helped at aftercare at Ainslie Parklands Primary School where she enjoyed bonding with the children and becoming more connected with her local community. Meaghan took part in the Mitchell River rafting expedition for the Adventurous Journey component of her award.

Jasmin Liew, like many Tintern students, is a very busy young person. She chose a skill that she could fit in around her many commitments and complete in her own time, at her own pace. Jasmin learnt to crochet and ended up completing both an attractive and practical scarf and beanie. For her physical activity, she wisely chose to use her dancing which she studies at a high level for many hours a week. Jasmin combined her love of dance with her service contribution and became an assistant teacher for junior students helping them in their weekly class. For her Adventurous Journey, Jasmin took part in the Sea Kayaking expedition on the Gippsland Lakes.

Rose Russell took part in the 2016 Year 9/10 production to fulfil the skill section of her Bronze Award. Those of you who saw her in this production will remember that she was an excellent cast member and an accomplished performer. Rose used her basketball commitments for her physical activity and was awarded the ‘Most Improved Player’ award at the end of the season. She also combined her love of sport with service and coached an Under 12 basketball team at her club. For her Adventurous Journey, Rose took part in the Mitchell River rafting expedition,

In addition to these 9 students, one student achieved her Silver Award which involves a 6 -12 month time commitment.

Karly Rosenbrock played netball for Norwood Heights Netball Club in the open age group. Her goal for netball was to improve her netball skills and, in particular, her ball skills as she wanted to be able to use her speed more effectively on court in order to become more competitive. For her skill, Karly worked on developing her singing skills and technique with a goal of increasing the range of her voice and the breadth of her repertoire. Karly’s community service contribution was to the Tintern Poverty Project and Social Justice group. She attended weekly meetings and helped run a number of fundraising events, for example, the Trivia Night which raised funds for ‘The Sunflower Foundation’. Her goal was to become further educated on poverty around the world and, with the development of her own knowledge, she wanted to teach younger students about the same issues.

Currently, there are 76 students in Years 9-12 enrolled in the Duke of Edinburgh program at all 3 levels of the award. The Duke of Ed journey for each of these students is a personal one and only the students themselves know how much they have challenged themselves and just what they have achieved throughout the course of their award. We congratulate these senior students on their wonderful achievements. 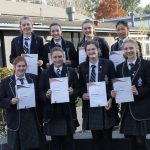 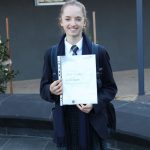