Elijah has been training at Ultimate Martial Arts in Heathmont since he was three and a half. He is well supported by his incredible teachers, in particular, Aaron Smalley who flew to Sydney just to support him. Elijah has also qualified to grade for not one but two Black Belts in December. This means he will grade for a Black Belt in both Bushidokan Karate and Extreme Martial Arts. Good luck for December Elijah!

And finally some words from Elijah himself…

This weekend was for me one of the greatest experiences I have ever had! My Black Belt training was cut short for a day or two, whilst I travelled to Sydney to compete in the ISKA World Cup Championships. I competed in Extreme Martial Arts (XMA), Sumo and Traditional Forms (kata) I went out hard and came in with maximum results! I loved the experience, the atmosphere and especially the Chinese Dragon dance at the start. I hoped to make everyone proud and couldn’t have hoped for a better outcome. And I couldn’t have been any more lucky to have such great support from everyone… thank you. 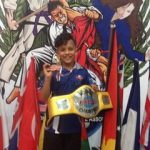 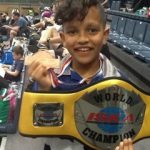 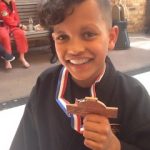