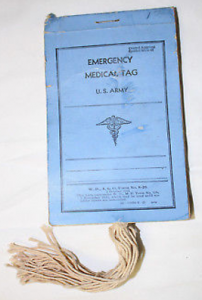 If you have ever been to an emergency department, you will be familiar with the system used to assess the order and priority in which patients are seen. Triage, where the most serious patients, those with the greatest need are seen to first. So a broken arm is considered less urgent than a suspected heart attack and so on.

The term triage comes from the French verb trier, meaning to separate, sift or select.

However, back in WWI, triage was slightly different, because as wounded soldiers were brought in, and medical resources were scarce, it was up to the doctors to efficiently ‘colour tag the wounded’.

The system involved three colours of tags, red, blue and yellow. Red stood for hopeless, nothing could be done to save them. Blue indicated that the only chance a person had was if medical assistance were given immediately. And a yellow tag meant that the wounded soldier would make it even without treatment. So, because medical supplies were limited, only those people with blue tags received medical attention.

There is a story that one day a soldier named Lou was brought in. He was severely wounded and one leg was blown apart. The doctor who examined him tagged him with a red tag, indicating that his case was hopeless, and left him to die. But a nurse noticed that Lou was conscious and began to talk to him. After getting to know him better, she couldn’t just let him die, so she broke the rules and replaced his red tag with a blue tag.

He was transported to the hospital in the back of a truck and spent the next several months recuperating. Lou lived and the nurse he had met became his wife. Although minus one leg, he was able to lead a happy and full life because someone broke the rules and changed the tags.

I think from the moment we meet a person or a student we begin our own sort of system of triage, our own system of assessing, ordering and prioritising. Sometimes this system works really well, but sometimes it doesn’t and we end up limiting what the people around us are capable of based on limits we put on them.

Jesus saw the world around him differently, the value he placed on people’s lives and the kindness that he extended was life-changing.  Where there was limits, he broke them and freed people from what enslaved them, from a past they wanted to be free from to an illness that had caused them to be outcast and excluded. When Jesus saw people, he saw their potential, much like the nurse in this story, not their limits.

So perhaps we need to consider ‘blue tagging’ everyone, seeing their potential, and then giving them the support to achieve it?