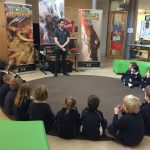 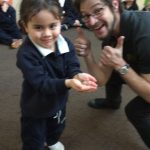 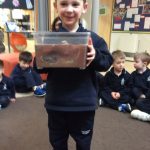 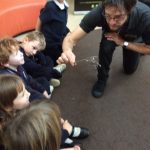 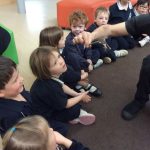 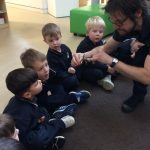 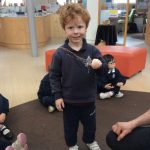 Within the classroom, last term and again this term, there has been a strong interest in the insect world.

We have supported this learning in a variety of ways. We put bugs in a set-up environment for the children to explore. By adding magnifying glasses, the children could look closely at the bugs. We classified them simply by colour and then in more complicated ways such as by number of legs or if they had wings. The children went on bug hunts in our garden collecting earwigs, snails and slaters. We dug into our worm farm and observed the worms that live there. The children have drawn bugs and made their own bug creations with play dough and our construction sets. We have read stories and books to the children both fictional and factual.

Continuing to foster this interest, we invited Darren to school. Darren is a presenter from Wildlife Xposure. He brought some bugs for the children to see close up. As he presented the different bugs, he talked to the children about what they eat, who eats them, where they live and their special features. He discussed invertebrate, skeletons, and the parts of the body. Who has six legs and who has eight. He told the children about their special jobs in the environment and how they are all linked together. We discussed life cycles, adaptations, the food chain, ecosystems and ecology. Darren handed the animals around the circle so each child was able to see them close up, as well as touch them. They were also allowed to handle the “safe” insects and have their photo taken.

We hope you enjoy all the photos.